The security services of the Autonomous Administration carried out five individual arrests and one collective arrest drive in Zghair Jazira village. The individuals remain unaccounted for, while the village’s detainees were all subsequently released 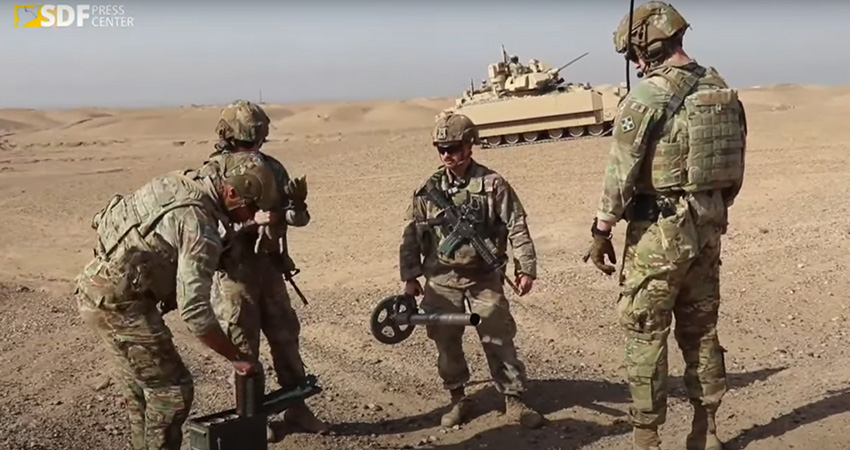 A Screenshot taken from a video clip of joint military maneuvers between SDF forces and the International Coalition in Deir Ezzor. Source: SDF Press.

In February 2022, Syrians for Truth and Justice (STJ) documented individual and collective arrest drives in Deir ez-Zor province, all led by security services affiliated with the Autonomous Administration.

As for collective arrests, STJ obtained information that the security services launched a large-scale drive in Zghair Jazira village. The campaign followed a gunfight between the Syrian Democratic Forces (SDF) and “smugglers”, one of whom was killed during the exchanged fire.

Notably, the reported arrests are only the cases that STJ managed to corroborate, recognizing reports from local sources, which indicate larger numbers of arrests in Autonomous Administration-held areas in Deir ez-Zor province.

On 18 February, a group of the SDF-affiliated Commandos Forces arrested a teenage boy, Hamza Hussein al-Awdeh (14), from his house in al-Shuhail town. The forces did not declare the arrest reasons and held the boy in one of their centers in al-Busayrah town. His fate remains unknown.

To obtain details on the case, STJ reached out to one of the boy’s second-degree relatives, who recounted:

“A group of the Commandos Forces in two vehicles, Van and Kia, parked across from the house. Then, they made their way in and searched every corner of the house. They withheld the family’s cellphones and arrested Hamza without saying why. We have no idea about the charges he is facing; however, we learned that he is being held in al-Busayrah town and that he has not been brought before the court yet.”

On 18 February, a group of the SDF-affiliated Commandos Forces arrested two brothers, Majed and Maher, from their house in al-Shuhail town. The forces did not declare the reasons behind the arrests and held the brothers in one of their centers in al-Busayrah town. Their fate remains unknown.

STJ reached out to a neighbor of the brothers, who witnessed the arrest. He narrated:

“A group of the Commandos Forces in two vehicles, Van and Kia, stopped in front of the house of the detainees. They searched the house and confiscated all the family members’ cellphones. They did not inform anyone of the charges laid against Majed and Maher.”

On 18 February, a patrol of the Organized Crime Service arrested Saleh al-Muhammad al-Abas (20) from his house in al-Hisan village. The patrol did not declare the reasons for his arrest and held al-Abas in one of their centers in al-Kasrah town. His fate remains unknown.

A neighbor of the detainee, who witnessed the arrest, told STJ:

“We were sitting in front of our house, when two vehicles, a pickup, and a van, stopped by Saleh’s house. The [patrol’s] personnel had light-green outfits on. They nocked at Saleh’s door. When the door opened, they just arrested him and set off. We did not hear anything about the reason of arrest, or the charges they had against him.”

On 25 January[1], a joint force of the Commandos Forces and the Anti-Terror Unites (HAT) raided the house of Tariq Hasan al-Hussein (25) in al-Jneineh village and arrested him for unknown reasons. The patrol held him in the al-Jazara Prison.

A relative of Tariq narrated the details of the arrest:

“Tariq is married and has two children. On the day of arrest, he was at home, asleep. A force of six pickups, one Inter, and two Shas-Toyotas, mounted with machine guns, cordoned the house. The patrol members had either black or green camo outfits, with masks. A number of these members went into the house and arrested Tariq without declaring the reasons. We inquired into his place of detention and paid money to officials, who promised they will release him. All this was to no use. We recently learned that he is being held in the al-Jazara Prison.”

Local sources from Zghair Jazira village told STJ that SDF members imposed a 3-days siege on the village on 10 February. They added that the SDF blocked all entrances to the village.

The SDF enforced these measures following gunfights between the SDF and several fuel smugglers in the village. The hostilities killed one of the smugglers, Nasser Feisal al-Jarah.

On the heels of the siege, a joint patrol of the SDF-affiliated Commandos Forces, the Internal Security Forces (Asayish), and the Deir ez-Zor Military Council raided the village and arrested dozens of locals. The detainees were released in batches over several days. The local sources confirmed that none of those arrested were subjected to beating or maltreatment while in detention.

[1] While this arrest took place in January, it was verified by our field researchers in February.