November 11, 2019 2k views Download as PDF This post is also available in: Arabic Font Size A A A 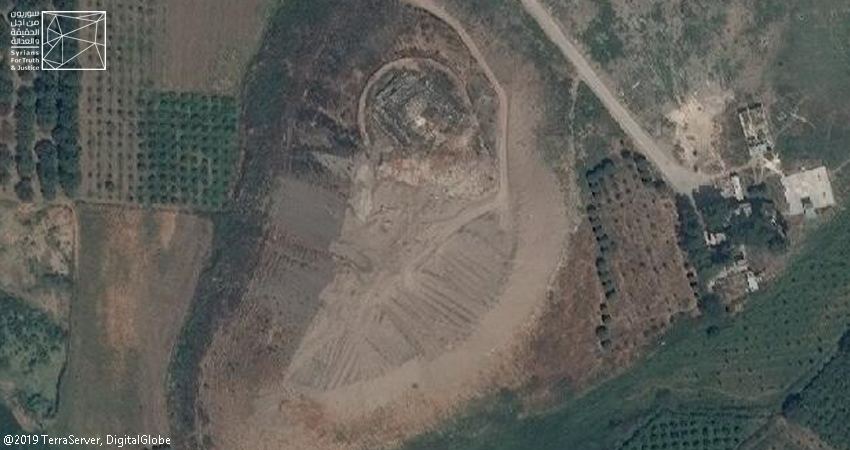 The bulldozing operations in a part of the Ain Dara archeological site. Aug. 21, 2019. Credit: TerraServer, DigitalGlobe.

On 20 September 2019, opposition news outlet “Nedaa’ Syria” published a video[1] highlighting a live-fire training exercise undertaken by a special force’s unit of the National Front for Liberation (NLF). At just under three minutes long, the video shows fighters using small arms, including hand and rocket-propelled grenades, in their mock assault on a hilltop position. This hilltop happens to be the location of the ‘Ain Dara archaeological site in Afrin, containing a Syro-Hittite temple believed to date as far back as 1300 B.C.[2]

Photo no (1) – A screenshot from the Nedaa’ video showing fighters approach the temple from the northwest.

The ‘Ain Dara site is located approximately five kilometers south of Afrin city, just east of the Afrin river. Excavated throughout the mid-to-late 20th century, the site is most notable for the well-preserved Iron Age temple that sits atop its 30m tall hill (known as ‘Tel ‘Ain Dara’).

Photo no (3) – The location of the ‘Ain Dara archaeological site in relation to Afrin city (sat. image: Maxar Technologies, 3 June 2018).

This temple “is decorated with a series of basalt reliefs…carved in the highly distinctive Syro-Hittite style.”[3] The rest of the hill includes other sites of excavation as well as a large basalt sculpture of a lion, discovered in 1955.

The temple itself appears to have been the mock objective in this NLF live-fire exercise. Beginning at 0:37 one can observe fighters located at a checkpoint to the northeast of the ‘Ain Dara temple, firing up at the hilltop.

Photo no (6) – A screenshot from the Nedaa’ video, showing fighters at the base of Tel ‘Ain Dara.

From this angle both the safety railing encircling the archaeological site and a recently dug dirt road leading to the summit are visible. At 1:34, a group of fighters approach and scale the hill from the northwest. Between 2:12 and 2:36, NFL members can be seen approaching the back of the temple, both firing rounds and throwing grenades in the structure itself.

Photo no (8) – An NLF fighter throwing a grenade in the vicinity of the temple.

Photo no (9) – A grenade thrown by an NLF fighter who was standing in the vicinity of the temple during the training exercise.

Photo no (10) – An NLF fighter firing a rifle within the temple.

This is not the first time the ‘Ain Dara site has been damaged during the war. The temple, located over a kilometer away from the nearest settlement, was hit by an airstrike in January of 2018 during the first three days of Turkey’s Operation Olive Branch.

Photo no (11) – ANHA footage showing the damage done to the temple following the January airstrike.

An investigation conducted by ASOR Cultural Heritage Initiatives[4] found that “explosions [had] heavily damaged the central and southeastern portions of the temple,” including some of its famed sculptures and reliefs. The same report implicated the Turkish Air Force in the attack and found that GPS-guided Joint Direct Attack Munitions (JDAMs) were likely used, indicating “that the area of the temple was targeted directly.”

Tel ‘Ain Dara has also been the site of some recent construction activity. Since December of 2018, the archaeological excavation sites that covered the hilltop south of the temple appear to have been buried with a freshly moved layer of dirt.

Photo no (12) – Two satellite images -the first taken on December 1, 2017, and the second on 29 January 2018- clearly show the changes in the archaeological site and the site targeted with the airstrike by the Turkish Army in the first three days of its Operation Olive Branch launched with allied Syrian armed opposition groups on January 20, 2018.

Photo no (13) – Two satellite images -the first taken on August 22, 2018, and the second on August 21, 2019- show changes took place in the area surrounding the ancient temple; it is clearly appeared to be bulldozed.

Photo no (14) – The bulldozing operations in a part of the Ain Dara archeological site. Aug. 21, 2019. Credit: TerraServer, DigitalGlobe.

Tracks from construction vehicles can be seen in satellite imagery throughout this time period, including on the aforementioned road carved into the hill’s northeastern face, dug between May 22 – 24 2019. On July 10th 2019, the Syrian Ministry of Culture accused[5] Turkey of both stealing cultural artifacts from and using bulldozers to destroy archaeological sites in Afrin. This accusation was published along with three photos from ‘Ain Dara, allegedly showing such activity.

Photo no (15) – Photo shared by the Syrian Ministry of Culture showing a lion statue being measured.

Photo no (16) – Photo shared by the Syrian Ministry of Culture showing large lion statue originally located on the hill’s southern side, submerged in dirt.

Two of these images show lion sculptures being measured; one of which, at over 330 centimeters long, is clearly the famous basalt lion statue once located on the hill’s southwestern side. While the sculpture had previously been standing upright on gravel, it can be seen here partially submerged in newly moved dirt.

Photo no (18) – Photo shared by the Syrian Ministry of Culture showing a bulldozer on the hilltop.

Another picture, with an unidentified statue lying on its side in the foreground, shows a bulldozer moving earth on the hilltop. What has happened to these sculptures since the photos were taken is unknown.

The National Front for Liberation, formed May of 2018,[6] is a Turkish-backed opposition coalition largely active in Idlib and consisting of multiple Islamist and FSA groups, including Faylaq al-Sham, Ahrar al-Sham, and the Free Idlib Army. With its media almost entirely focused on fighting against the regime, the NFL does not advertise its presence in Afrin. However, Faylaq al-Sham was one of the most prominent factions involved in 2018’s Operation Olive Branch, primarily operating along the Afrin-Idlib border not far from ‘Ain Dara. Since this incident occurred, it was announced[7] that the NLF would be merged into the ‘Syrian National Army,’ implying that these groups will be drawn under even closer Turkish supervision.

This incident is yet another example of wanton disregard Turkey and its allies have displayed towards local cultural heritage in Afrin, a pattern unlikely to cease with the ongoing Operation Peace Spring east of the Euphrates. Destruction of such heritage sites is considered a war crime by the International Criminal Court,[8] and such acts have been condemned by the UN Security Council as recently as 2017.[9] While it’s unclear what the aim of the ongoing construction project on Tel ‘Ain Dara is, the fact that Turkish-backed militant groups are using the Iron Age temple as training grounds is a worrying sign.

[…] sites of profound significance in the Afrin region,” including bulldozing cemeteries, conducting https://stj-sy.org/en/afrin-turkish-backed-groups-undertake-live-ammunition-exercises-in-iron-age-te&#8230; military exercises in a Syro-Hittite temple dating back to 1300 B.C., and destroying Afrin’s […]