Dismissed employees filed applications to get their jobs back; however, they were met with disapproval on the part of the National Security Bureau in a violation of the settlement deal

A number of departments, affiliated with the Syrian government, turned down the applications filed by employees, they dismissed earlier, to get their jobs back after they underwent a settlement/reconciliation in northern rural Homs. The refusal is a violation of one of the national reconciliation deal’s terms, which covered northern rural Homs and was concluded by Russian negotiators and a committee representing the countryside. Syrians for Truth and Justice/STJ obtained several testimonies about the subject matter.

On the duration between the 3rd  and the 7th  of November 2018, STJ interviewed, via the internet, a number of the dismissed employees, who filed applications to governmental departments, where they used to work, as to get their jobs back based on the concluded deal. For their own safety, STJ refrained from revealing the names of the employees and the institutions where they were employed.  In addition to the interviews, STJ managed to have a look at a copy of the official letter directed by the Presidency of the Council of Ministers of the Syrian government to a department, notifying the latter of its denial of the application filed by one of the interviewed employees.

The dismissed employee H.M, from northern rural Homs, where he is based, conducted a settlement/reconciliation deal and filed an application to get back his job in one of the universities under the Ministry of Higher Education. The National Security Bureau answered his application with disapproval without clarifying the reasons. He added that he received his dismissal order upon getting out from prison in 2013, where he was detained by the Political Security Service for two months and released without any charges since he was arrested owning to namesakes.

In his turn, the dismissed employee Kh.D, from northern rural Homs, said that he was arrested in 2013, though he held his position for a long time, while the reason for his dismissal was that he did not refer to the Quartet Security Committee upon its request, which, back then, was formed out of four security services; the State Security, the Political Security, the Military Security and the Air Force Intelligence services. Lately, the employee has filed an application to get his job back, and the answer was a refusal by the National Security Bureau, which gave no further explanation.

In similar cases, dozens of employees were dismissed from their jobs for no clear reasons. The orders of dismissal were reported either in a group manner, through an official letter from the Presidency of the Council of Ministers, in an individual manner, notifying each employee separately, or without notifying the employee, where the security services notify the financial office of the department of stopping or suspending the salaries of the dismissed employees, according to three employees, who have been displaced to Syria’s north under the reconciliation/settlement deal and whom STJ interviewed.

Concerning the refusal of rehiring employees within governmental departments being a violation of the reconciliation deal’s terms, Ali Ezzidine, a media personality who attended the last round of negotiations between the armed opposition groups, the Russian negotiator and the female negotiator Kenana Huwaijeh in the al-Dar al-Kabirah Crossing on April 29, 2018, explained that the Russian General Alexander Ivanov, commander of Hmeimim air base, has clearly and openly stressed that the deal must include rehiring the dismissed employees at governmental departments along with university students, presenting guarantees that this is to be met in six months from the date of signing the deal.

Since the Syrian regular forces and their allies controlled northern rural Homs, many violations of the reconciliation/settlement deal were documented, where governmental institutions refused to rehire the employees they dismissed earlier and dozens of the region’s young men were arrested, detained and summoned for various reasons, some of which are unknown. Some of the young men were released, while the destiny of others is yet unknown. Covering these incidents, STJ published several detailed news reports.  [1] 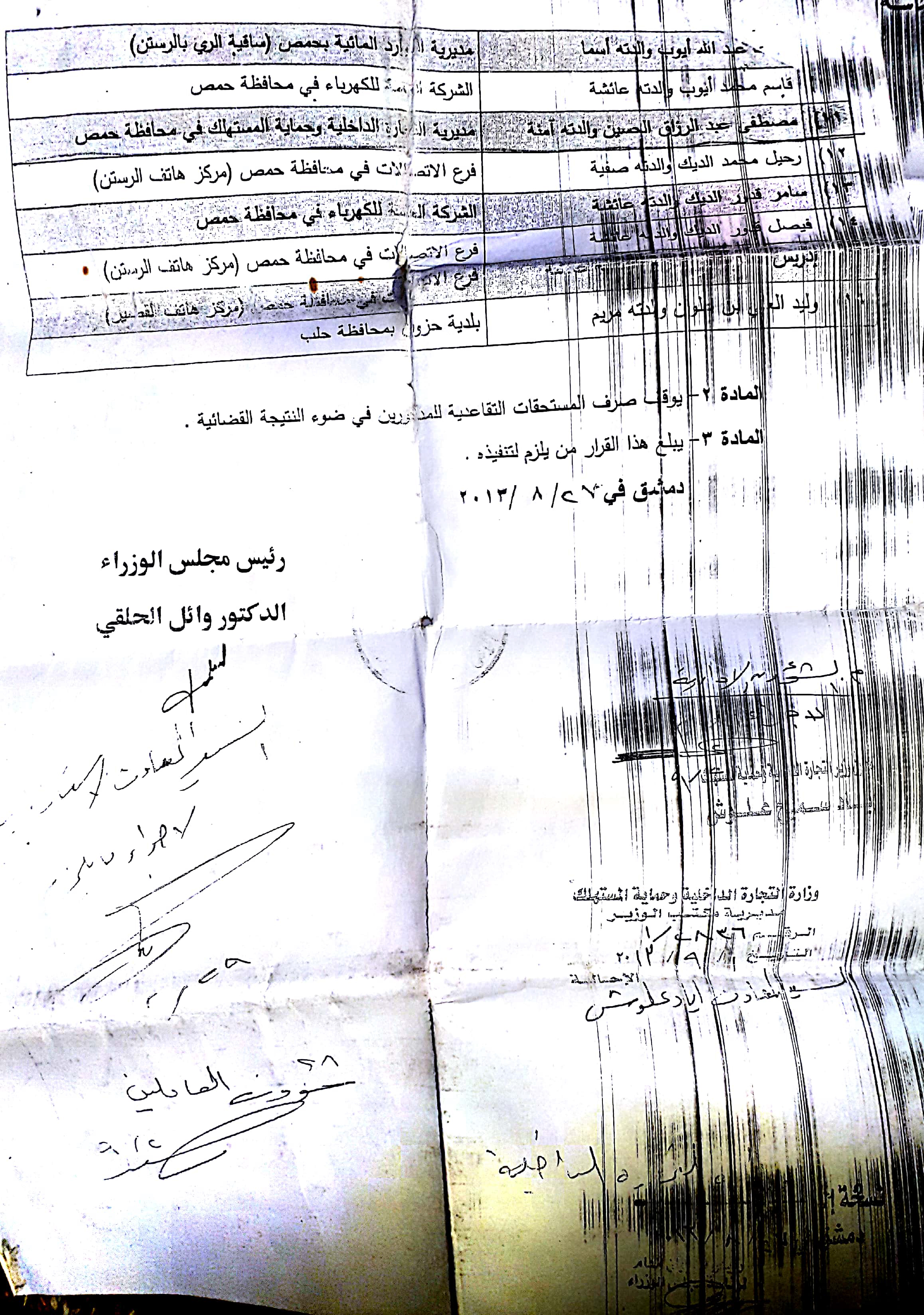 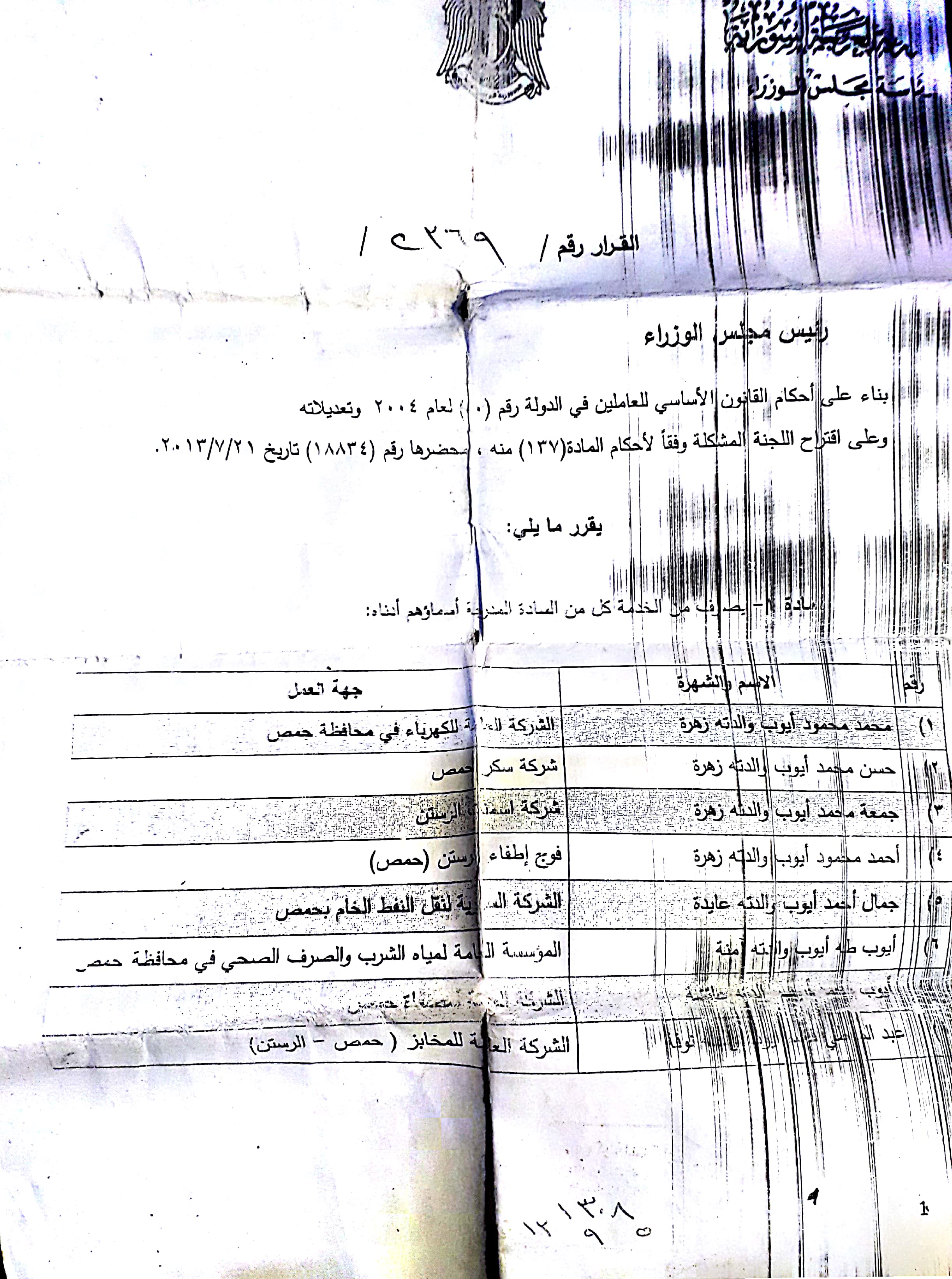 Copy of a dismissal order which STJ obtained from one of the dismissed employees it interviewed.