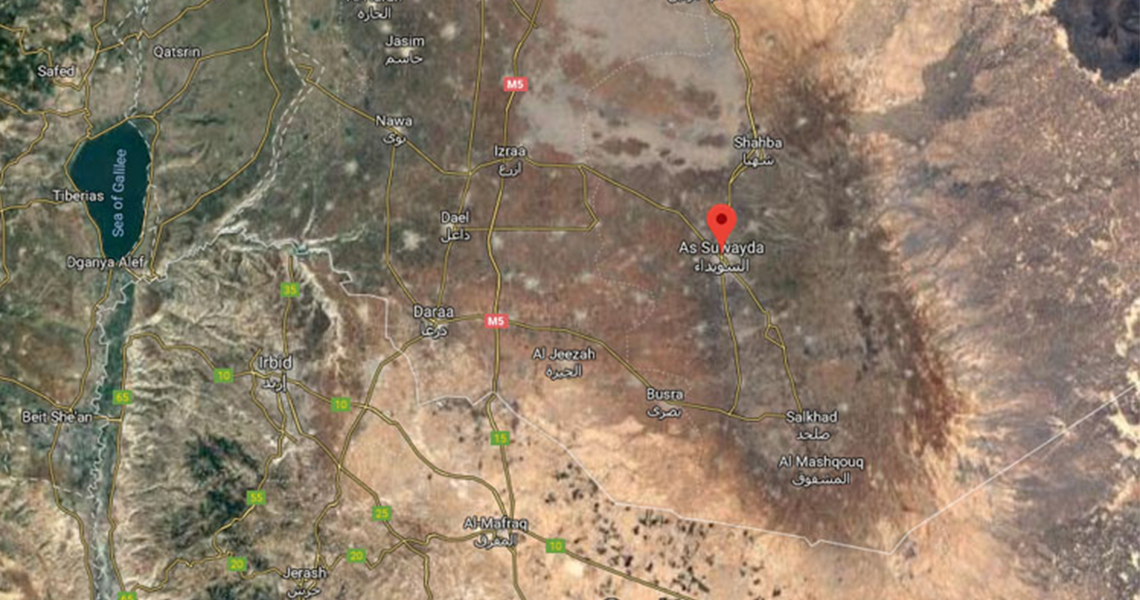 The organization that calls itself the Islamic State, also known as ISIS, executed one male civilian who were kidnapped from Shabaki village, located in al-Sweida province south of Syria, during their attacks[1] launched on July 25, 2018. ISIS posted a video footage showing the moment of the execution claiming the reason to be the fail of the negotiations between ISIS and the Druze Sect.

On August 2, 2018, the organization slaughtered the guy identified as Muhannad Zoqan, 19 years old, a first year student at the Scientific Research. On August 5th, a video footage was published in which the guy appeared handcuffed and said:

Image of the guy Muhannad Zoqan after being executed by ISIS on August 2,  2018.

Salam Azzam[2], the local activist said in an interview with STJ on August 6, 2018, that the negotiations between both sides stopped on July 31, 2018, after the Reserve Forces (al-Quwat al-Radifah)[3] implemented summary executions against a group of ISIS elements whom supposed to have been transferred from Hawd al-Yarmouk (basin) located in Daraa to the Badia in al-Sweida under an agreement between the Syrian regular forces and ISIS[4]. Estimated 72 elements of ISIS are still captives by the Russian forces in Busra al-Sham and the Russian forces reject negotiations on them, which prompted ISIS to stop the negotiations and execute the guy Zoqan.

In the same context,  "Sweda Now" the local News Network, published a video footage showing persons hanging a man in al-Sweida with lots of people around him. The network said the hanged man was one of ISIS elements who was held by the Syrian regular forces on August 6, 2018, after a bomb attack carried out by three elements of ISIS on sites of "the Syrian Social Nationalist Party" in Douma village northeast al-Sweida. The bomb attack killed two elements of ISIS and four persons from the Party, and injured the element who was hanged, as stated by Sweda Now. STJ could not verify the information provided by the Network nor the identity of the person executed.

A snapshot from a video footage published by Sweida Now on August 7, 2018, and said it was an execution of one element of ISIS who was taken captive as a result of an offensive carried out by ISIS on Douma village.

On August 5, 2018, the Syrian regular forces had sent military reinforcements to the east countryside of al-Sweida province preparing to start a military operation against ISIS. Local factions from al-Sweida participated in the operation including Maghawir al-Jabal, Suqour al-Jabal, Quwat al-Basha and Quwat al-Zghaba, which both are affiliated to Rijal al-Karama east of al-Sweida, in addition to Suqour al-Tawhid. The Syrian regular forces could advance towards the eastern Badia and control several hills, Maghr Malha and Tal Sanim in al-Kara'a area, in conjunction with their advance from the axis of the east countryside and the capture of al-Hisn area on August 6th . According to Suwayda 24.

[2] An alias of one activist from al-Sweida who declined to disclose personal information for security purposes.

[3] The Reserve Forces (al-Quwat al-Radifa) are members of the opposition factions who conducted "settlement/reconciliation" with the Syrian regular forces under an agreement between both sides to end the hostilities in Daraa province. It contains hundreds of elements from "Liwaa Ahrar Tafas, Mu'taz Billah Army, Alwiyat Qasioun, Jaysh al-Thawra, the Headquarter Operation of "Watasimo", al-Harrah Military Council, Tasil Military Council, Swords of Truth Room, Liwa Ahrar Qita, Manifest Victory Operations room, and other factions from the east area of the province."

[4] For more information about the deal and the execution operations, please read the report prepared by STJ on August 2, 2018 entitled "Another Agreement Concludes to Move ISIS Elements to the North Countryside of al-Sweida in Exchange for the Release of the Kidnapped" https://www.stj-sy.org/en/view/658