Preface: Since November 15, 2017, many cities and towns in Eastern Ghouta have been subjected to one of the most violent military attacks conducted by Syria regular forces/Syrian army, as the majority of cities and towns were shelled with various types of shelling, whether by warplanes or artillery shelling or by tanks. Large number of various weapons were used in these military operations, too. According to a Syrians for Truth and Justice/STJ reporter, the Syrian regular forces used cluster munitions to bombard cities and towns of Eastern Ghouta. On 18, 19 and 20 November 2017, Douma[1] was shelled with cluster munitions, leaving many civilians dead and wounded, as locals and eyewitnesses confirmed to STJ.

Hazeh[3], as well, witnessed bombardment with cluster bombs on its neighborhoods, specifically on 15, 16, 17 and 18 November 2017, but the most violent attack was on November18, 2017, when the use of cluster munitions left dozens of civilians being dead and wounded.

It is worth mentioning that this escalation comes in the context of the fierce military campaign launched by Syrian regular forces on Eastern Ghouta on Tuesday, 15 November 2017, after Ahrar al-Sham al-Islamiyya Movement announced the Battle of "They Were Wronged" that began on Monday morning November 14, 2017.  STJ reporter said the battles claimed the lives of several soldiers from the Syrian regular army, including officers, headed by Walid Khawshqeji, Lieutenant General and deputy director of the Military Vehicles Management, located in Harasta in Eastern Ghouta, besides fighters of Ahrar al-Sham al-Islamiyya Movement managed to control large sections of the Military Vehicles Management and seize weapons and ammunition.

It is to be noted that Eastern Ghouta is one of the areas included in de-escalation zone agreement in Syria, as on May 4, 2017, sponsor states of Astana Talks (Russia, Turkey and Iran) signed a memorandum of understanding for the establishment of de-escalation zones in Syria, which included both Eastern Ghouta in Damascus countryside, Idlib province and some parts of northern Homs province, as well as some parts of adjacent provinces (Latakia, Hama, and Aleppo) and some parts of southern Syria. One of the most prominent items is the cessation of hostilities between conflicting parties and the provision of conditions for the delivery of medical assistance.

On July 22, 2017, Jaysh al-Islam participated in signing the de-escalation zone agreement in Syria, followed by Faylaq al-Rahman faction on August 18, 2017.

Earlier, STJ had published a report highlighting violations of the de-escalation zones in Eastern Ghouta.

Custer Munitions And The Syrian Conflict

Cluster munitions are weapons consisting of a "container" that opens in the air and disperses large numbers of "bomblets" or explosive submunitions that scatter over a wide area. According to the type of the cluster munitions, number of the submunitions can range from several dozens to over 600 munitions. Aircraft, artillery or missiles can throw cluster munitions. The bulk of submunitions are designed to explode on impact, and most of them are characterized by free fall, in the sense that they are not directed towards one specific goal, which means they do not distinguish between military or civilian objectives.

Cluster munitions were used for the first time in World War II, and a large proportion of cluster munitions, currently stored, were designed to be used in the Cold War. The main purpose of cluster bombs is to destroy the multiple military objectives scattered over a wide area, such as tanks or infantry formations, and to kill or injure combatants."[4]

"The majority of cluster munitions do not explode as expected but remain a threat to life until they are moved. It is more hazardous on civilians’ lives because of the vast area, known as "suspicious spots” that can be covered by cluster bombs from a single munition."[5]

(118) states have prohibited cluster munitions because of the damage caused at the time of the attack. Both the Syrian and Russian governments have not yet acceded to the Convention on Cluster Munitions-CCM, which comprehensively prohibits all use, production, stockpiling and transfer of cluster munitions. States Parties commit never to assist, encourage or urge any person to engage in any activity prohibited by the provisions of the Convention.

“Cluster munitions are inherently indiscriminate weapons that must not be used in any circumstances. Each cluster bomb scatters scores of bomblets over an area, the size of a football pitch. Because of their high dud rate, they pose a continuing threat to civilians for years after their initial use. The repeated use of unguided bombs in the vicinity of densely populated civilian areas would violate the prohibition of indiscriminate attacks.”[6]

Since November 15, 2017, Douma has been witnessing an intensifying shelling, but on November 18, 2017, Syrian regular forces started using cluster bombs to bombard the city, this was confirmed by Hasan al-Shagray, from Douma, he spoke to STJ and said:

"At 11:00 a.m. on Saturday, 18 November 2017, ash-Shames neighborhood where I live was targeted with cluster bombs; the Syrian regime fired rockets loaded with cluster bombs from al-Jabel area that overlook Douma; the rockets exploded in the sky and several bombs fell and spread in the streets and on top of the buildings. Not all of the bombs exploded directly as some detonated almost a minute after their fall, and the regime had meant the timing of those bombs to be exploded after a period of its fall on the ground in order to occur the greatest possible harm among civilians. A young girl from the Khabiyah Family was seriously injured in the feet due to explosion of that dud.”

Image shows one of the rockets loaded with cluster bombs, which landed on Douma on November 18, 2017.
Photo credit: Syrians for Truth and Justice-STJ

The following day, specifically on November 19, 2017, the Syrian regular forces repeated shelling Douma with cluster munitions, as confirmed to STJ by Hasan al-Shagray who said that at 3:00 p.m., the city was shelled again with rockets loaded with cluster munitions launched from al-Jabel area that overlooks Douma and targeted ash-Shames neighborhood as well. However, this time the bombs exploded immediately after it fell on the ground, and killed a 10-year-old child identified as Muhannad az-Zehr. In this regard, Hassan al-Shagray continued:

"Douma has been targeted with cluster bombs for three consecutive days, as in addition to shelling the city on 18 and 19 November 2017, the regime repeated the bombardment once again. At 1 p.m. on Monday, 20 November 2017, our neighborhood was shelled again, but it did not cause serious damage this time, because the people had taken care and caution and went downstairs to the hideouts and basements, preventing by that civilian casualties. It should be known that the bombs landed in an area its circumference is about 400 meters."

A video footage published by Douma Revolution on November 19, 2017, showed the damage cluster bombs caused to residential neighborhoods in Douma on the same date. 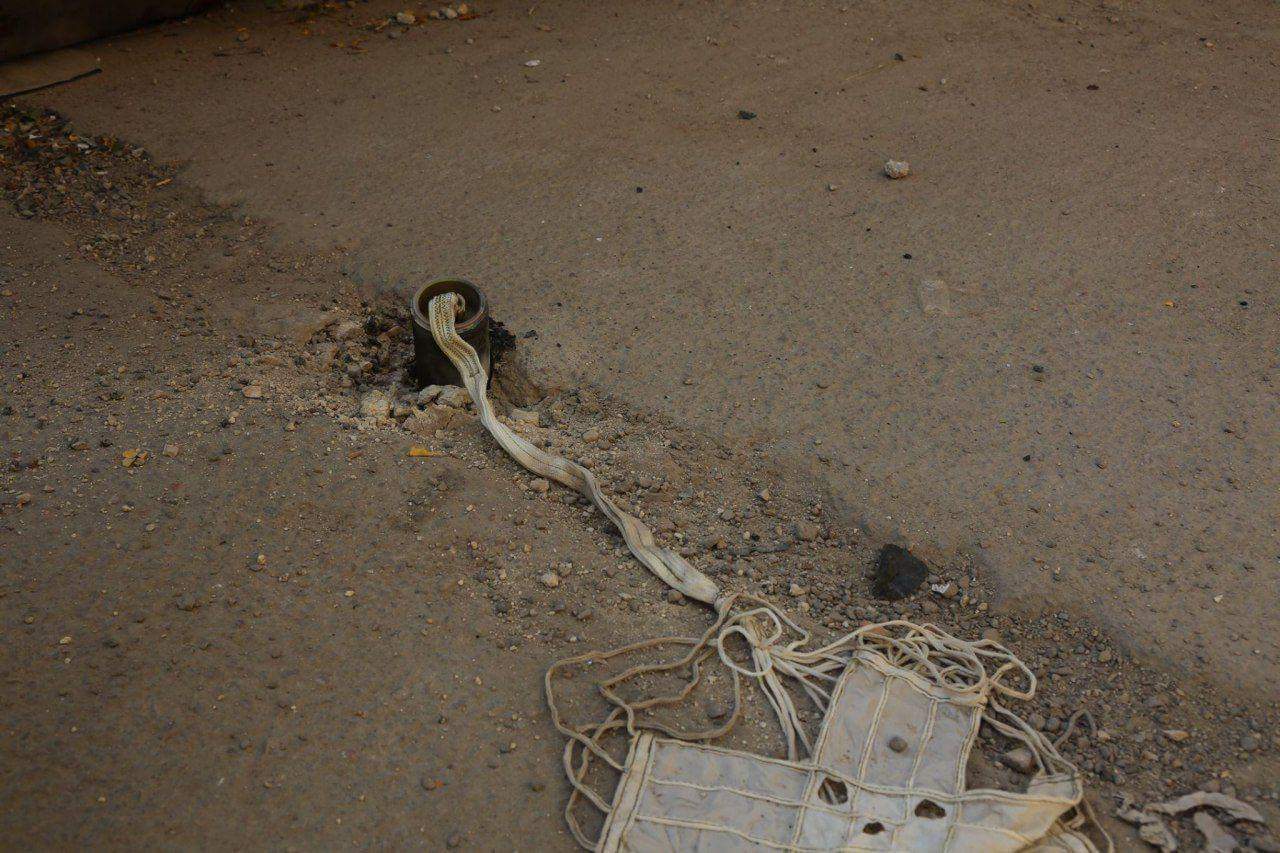 In another testimony, Jamal al-Hanafi, who hails from Douma, asserted that on November 18, 2017, his neighborhood “al-Qawatli” was targeted with cluster bomb; he told STJ:

"On Saturday morning at 11:00, November 18, 2017, my friends and I, while standing in the street, saw something open in the sky and bomblets loaded with parachutes falling from it, immediately we fled and hid, and we resorted to one of the cellars before those bomblets fell on the ground. Later we learned that an elderly woman had been seriously injured while trying to escape too. Not all the bombs exploded at the same time, some exploded about a minute later when ambulances came, but thank God, no one was hurt. Only one hour later, the regime forces attacked our neighborhood again with cluster bombs, injuring many people and killing one person, his body was scattered into pieces after a cluster bomb exploded in front of him."

Hamoryah town was not spared from shelling with cluster bombs; since November 15, 2017, it has been targeted with bombs for several consecutive days. Hassan al-Khateeb, who hails from Hamoryah, confirmed this to STJ, he said:

"On November 15, 2017, at 7:30 a.m., the Syrian regime started to launch the first cluster munition rocket on Hamoryah, but no casualties recorded, as the bombs exploded in a depopulated area. Only half an hour later, the regime targeted “al-Arba’ Mafarq” area with a second rocket, causing serious injuries to two civilians. The next day, on November 16, 2017, specifically at 11:30 a.m. the regime re-targeted the town with another rocket loaded with cluster bombs, killing two people identified as Nazir Badrah and Yahiya Wanusah, and injuring four others."

Image of the victim, Yahiya Wanusah, before his death by the explosion of a cluster bomb in Hamoryah on November 16, 2017.
Photo credit: Media Office in Hamoryah.

Hassan al-Khateeb added that the Syrian regular forces had shelled the town by cluster bombs on November 16, 2017, specifically at 12:00 pm, and the bombs landed in the area that link Saqba and Hamoryah, wounding two people seriously.

On November 18, 2017, at 4:30 pm, another rocket loaded with cluster bombs landed on the Villat area located in Hamouriya injuring four civilians. Only half an hour later, a second rocket was dropped on the area that link Beit Sawa and Hamoryah, injuring two civilians and killing another identified as Mahfouz at-Tom, STJ reporter confirmed.

Whereas on November 19, 2017, the most losses were among civilians.  STJ confirmed that the town was shelled with a rocket loaded with cluster bombs at 6:00 p.m., and the bombs exploded at night and indiscriminately targeting a densely populated area, causing a large number of casualties among civilians, including a paramedic while on duty, identified as Alaa Din Juha. Moreover, on the next day, a young man identified as Obah Yassin died by wounds had affected him that night.

A video footage published by the Media Office in Hamoryah on November 19, 2017, claimed to be the moment of the explosion of cluster bombs in Hamoryah town on the same date.

Image of a child who was injured due to the explosion of a cluster bomb in Hamoryah on November 19, 2017.
Photo credit: Facebook page of Media Office in Hamouriyah.

On November 18, 2017, Hazeh town was targeted with cluster bombs, where Bartayeh and ar-Rashidiyah located in the middle of Hazeh, in addition to the town’s Public Square and the Grand Mosque were not spared from the bombardment. In this regard, Hassan at-Tawil, one of the officers in charge of the ar-Rahma medical center in Hazeh said:

"Cluster bombs were dropped on Hazeh on 15, 16, 17 and 18 November 2017; the majority of the medical staff mobilized these days, given the great numbers of civilian injuries, mostly children and women. November 18, 2017, was the day when the town was bombed severely; a massacre took place in the very sense of the word, because the regime dropped on the town three rockets loaded with cluster bombs, and our medical center received strange injuries; as the shrapnel had torn bodies of the injured, causing a large number of civilian casualties. Some of them were identified as Fayez Damer, Zakaria Fayez Damer, Abeer Fayez Damer, Saiyah ad-Dabaan and Mohammed Salem.”

Image of a child victim who was killed following targeting Hazeh with a cluster bomb on November 18, 2017.
Photo credit: the Facebook page of ar-Rahma Medical Centre in Hazeh.

Image of a civilian victim who was injured following targeting Hazeh with cluster bombs on November 18, 2017.
Photo credit: the Facebook page for Hazeh Coordination.

[4] Cluster munitions: what are they and what is the problem? International Committee of the Red Cross, August 2013. For more information, please click on: https://www.icrc.org/eng/resources/documents/legal-fact-sheet/cluster-munitions-factsheet-230710.htm

[5] International Committee of the Red Cross, December 15, 2016, for more click on: https://www.icrc.org/eng/resources/documents/feature/liban-stories-151206.htm