Introduction  School violence has increased in some educational facilities in Idlib province recently. Many students were exposed to corporal punishment so that some of them were admitted to hospital for treatment.

In September and October 2018, estimated 46 school violence-related cases, have been reported in Idlib alone. Some 30 cases, in which the students were not physically hurt seriously, and other 16 serious cases that prompted to transport the children victims to the hospital, the head of the Free Educational Directorate of the Syrian Interim Government/the opposition, stated.

The rifeness of school violence triggered a public outrage. In response, several teachers who acted in a violent behaviour were dismissed. It is worth mentioning that Idlib's schools already lack the suitable atmosphere for learning because they were damaged in the armed conflict. Additionally, there are limited numbers of teachers. The Free Educational Directorate is trying to curb this phenomenon by adopting laws including dismissal of teachers whom are proven guilty.

In a report[1] published on September 4, 2018, The United Nation International Children's Emergency Fund/UNICEF described the reasons that we need to end violence in school.

“Violence perpetuates violence. Children who grow up around violence are more likely to re-enact violence as young adults. Violence has lifelong consequences. Toxic stress associated with repeated exposure to violence in early childhood can interfere with healthy brain development, and can lead to aggressive and anti-social behaviours, substance abuse, risky sexual behaviour, and criminal activity."

On October 2, 2018, a religion teacher beat the ten-year-old boy Mohammed. J. severely and resulted in scars on the boy's face and nose. Mohammed, who is in the fourth grade in a school in Kafr Amim town in the east of Idlib, was transported to a dispensary for treatment. His father recalled to STJ:

"On that day my son came back home with signs of beating on his face. He told us that a teacher, who is also a preacher in a nearby village, had beaten him. We could not understand the reasons for that. The head teacher and the head of the Educational Bureau followed-up the case and told us that the religion teacher had a specific psychological problem. In response, the teacher was sacked and was prosecuted. We, the guardians, send our children to school to get education but instead they are exposed to fear and violent behaviours. We have had enough over the long years of war. Many children have missed out on schools in the recent years. I hope that my son is the last one who is being punished physically in school. There should be a law that prohibits violence against the children in the public schools. We cannot afford to send our children to private schools".

"We informed the Free Educational Directorate and the Inspections Bureau. We suspended the teacher, prosecuted him, and warned him not to repeat his behaviour. The investigation showed that the teacher was suffering a psychological disorder. We will not allow the reoccurrence of such incidents. We will curb this phenomenon by every possible means", Ahmad al-Abdo added. 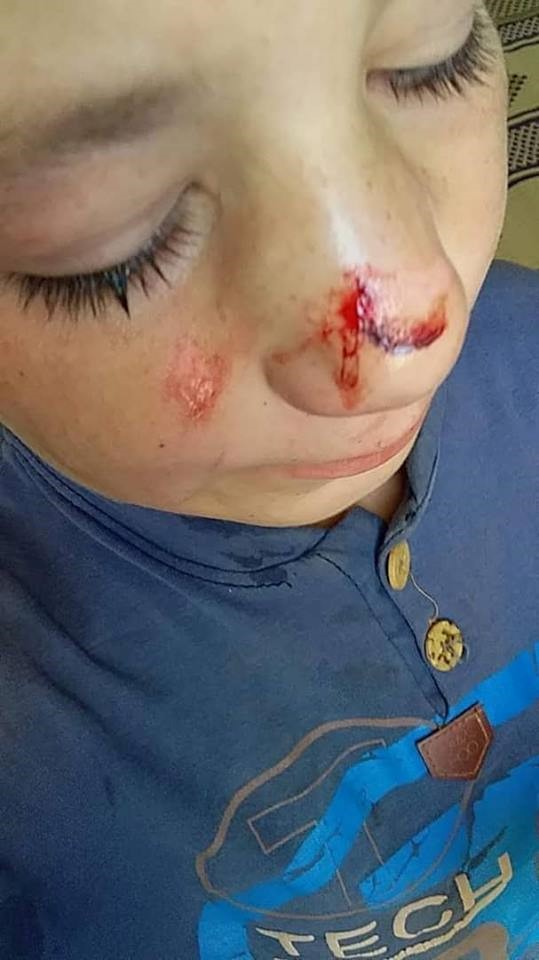 The child Mohammed who was beaten on Oct. 2018 by his teacher in a school in the east of Idlib.
Photo credit: the child's family

On October 26, 2018, the arm of the 12-year-old child Mohammed Haytham Jarad broke because his teacher beat him severely. One of the boy's relatives reported to STJ:

"Mohammed is in the sixth grade in Maarbalit Primary School. He lives in the same town with his mother. His father was killed in a former bombardment. On Oct. 26, Mohammed came back home complaining from pain in one of his arms as the teacher had beaten him with a stick. We transported him to the hospital where we learned he had a broken arm. The doctors splinted it. Later, Mohammed told us that the teacher punished all the pupils in the classroom as a collective punishment despite he is a superior pupil. The next day, we headed to the school to make a complaint. Upon enquired about the reasons for beating my nephew, the teacher said literally 'it is his misfortune that his hand broke'. His rude reply made us furious and the head teacher tried hard to alleviate the situation. Additionally, the head teacher warned him not to repeat such actions or he would be dismissed." 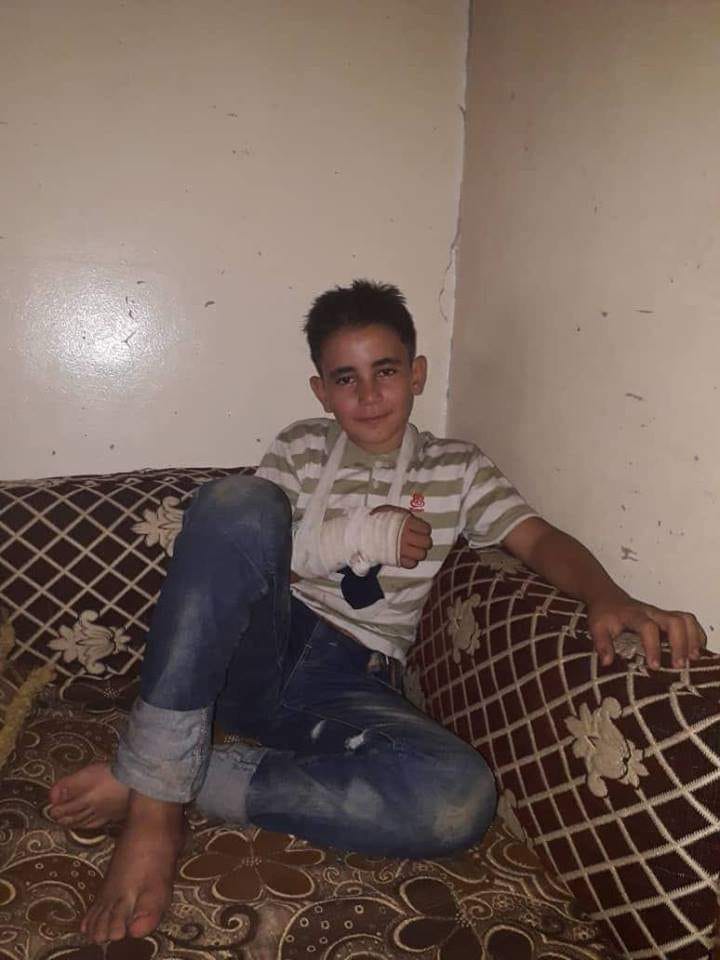 The child Mohammed Haytham who was beaten severely by his teacher late Oct. 2018.
Photo credit: the child's uncle.

Hussam. M., 8, is a pupil in Kafr Amim school. He is a victim of school violence as well as of a domestic violence. His father always mistreats him at home. Hussam has become an introvert person. His mother recalled:

"My poor Hussam has been mistreated by his father for months because of stress. His father is a vendor and he is exhausted whenever he comes back home. We live in poverty. I have five children and we all share two small rooms. What worsened the situation is that on September 15, 2018, Hussam's teacher beat him with a hosepipe. He came back home crying. He felt pain and disgrace as he was beaten in front of his schoolmates. I tried to calm him down and told him that he was punished because he disobeyed his teacher, but that did not work. He hates school.”

Hussam could not hide his profound sorrow being exposed to violent by his teacher and by his parents. He told STJ that many students are beaten with hosepipe at school. Therefore, Hussam preferred not to go to school anymore. He pretends to be asleep all day in order not to be rebuked or beaten.

"I cannot tell anything to my mother. She is always busy. She rebukes me all the time and couples me with smarter boys in the neighborhood. She keeps saying I talk in petty matters. I feel that my parents do not love me", he sobbed.

Um Hassan, from the south of Idlib, said that her nine-year-old boy Hassan refused to go to school because he was physically punished by his teacher. " The school is no longer a safe place for my son. He is afraid of his teacher and feels disgrace in front of his classroom mates", she exclaimed.

"My son comes back home often crying because his teacher beats him with a stick. He is not permitted to attend the lessons sometimes. therefore, he refused to play and have fun with his friends. His started to fall back. Then, he dropped out from school for a while. Similarly, many students are mistreated on the school grounds by their teachers or by peer-to-peer.  Our children had already missed out on school for a long time because of displacement and ongoing shelling".

In the same context, Yehiya al-Khateeb, the head teacher in a school in Binnish city, said that cases of school violence against children have dramatically increased in the recent years. That has a negative impact on the children's academic education and created a barrier to the desire to learning. Estimated 20 percent of children have dropped out school.

The violence the children experience at home or at school has always retroactive effects on the children's emotional and educational sides, he added.

"Childhood is the most significant period in the human's lifespan. children learn the basic skills and essential capabilities that help them lead a normal life. Children must be granted all their rights in this sensitive period being at home or school. Practicing violence, secretly or publically, against the children threatens their safety and wellbeing. Unfortunately, the school violence, especially if acted publically, against a child leaves an lifelong stigma in his/her mind. Additionally, school violence causes problems that might extend to adolescence or more, including depression, emotional and psychological disorders.

School violence is rife in Idlib as schools lack inspection as well as the spread of illiteracy. Domestic violence on the other hand is the result of poor economic conditions and perpetual displacement. There must be awareness campaigns to educate the household and the school teachers of the danger of acting in a violent manner towards the children".

In September 2018, several volunteers, including psychological experts, launched the 'Toward a Safe Environment' (Arabic: Nehwa Be'aten Amina) awareness campaign to curb the phenomena of school violence.  They visited the primary schools with the beginning of the academic year 2018-2019 to educate the teachers of the need to end this phenomenon.

A sociology teacher who was one of the participants in the campaign testified to STJ:

"Our goal is finding out positive ways to deal with the children instead of practicing violence against them. We targeted the behavioral effects of teachers and students. Our work plan was to meet the parents along with the teachers in order to provide them with psychological support and educate them of the hazard of the spread of school violence. We addressed the teachers, in particular, to inform them of their duties and roles towards their students and the proper ways to deal with them during lessons. There is no doubt that this kind of campaigns contribute to curb the hazard phenomenon. We are all hope that campaigns make dome headway."

Mostafa Haj Ali, the media director in the Free Educational Directorate in Idlib, said a supervisor was appointed in each school in Idlib, about 1200 schools.  The supervisors are tasked to follow-up the teachers and the students' affairs. The School Inspection Bureau has recently received some complaints, about which investigations are underway legally.

"We attempt to form ad hoc committees to pursue school violence related cases. Tight penalties have been passed against those who resort to violence. Penalties include dismissal if the school violence is repeated. Estimated 46 school violence-related cases, have been reported in Idlib alone. Some 30 cases, in which the students were not physically hurt seriously. Other 16 serious cases that prompted to transport the children victims to the hospital, and the teachers responsible for the offence were dismissed. Rigid laws must be adopted to end this phenomenon. We need to do much more to improve education".